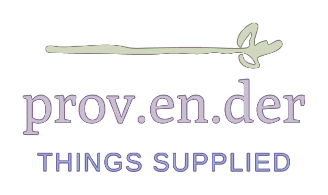 prov.en.der formed in 2012 as a collective of North American Charlotte Mason educators committed to “the mystery of education” at the center of Mason’s pedagogy. Members were concerned that the renaissance around her work not land on classroom techniques or book lists and sought ways to help teachers study the “things supplied.”

Though it looks like the Mason teacher is “doing very little” the collective was convinced that there is a need, especially in the current culture, to bolster Mason’s depiction of “the art of standing aside”-- allowing for "the things supplied" -- in the child, in the atmosphere, in the living ideas, in Mason's practices and ultimately, by the Spirit, whom Mason calls, "the Supreme Educator,” to be recognized and fostered.  Years of deep study and interaction with the parents and teachers discovering Mason anew created a shared conviction that the organization they would cultivate needed the kind of bottom-up, person-to-person sharing that had enlivened the Parents’ National Educational Union and the House of Education in Mason’s time. Two passages in Essex Chomondley’s biography of Mason provided the impetus – “Ambleside allowed life to be lived in a profound manner. It was an unwalled university of plain living and high thinking.” Efforts to share Mason's method of restraint and world-reading only needed to be “small, quiet, local and steadfast” to be fruitful.

Although a couple of the members had worked together previously the original collective of seven women -- Laurie Bestvater, Jennifer Gagnon, Tammy Glaser, Megan Hoyt, Leslie Noelani Laurio, Melanie Walker-Malone and Deborah Miller -- befriended each other after being sought for their Mason expertise in 2009 by a nonprofit whose “public charter branch” would design a non-sectarian curriculum based on Mason’s philosophy to meet current state Department of Education standards and provide for the opening of the first Charlotte Mason public school in 2011.Through-out the extensive 3-year curriculum design process the friends felt over and again the gap that existed in nurturing the aptitudes necessary for Mason’s singular approach and asked each other what could be done. prov.en.der is the outcome of that conversation. Deborah Miller, a founder of the sponsoring nonprofit along with Megan Hoyt, and an enthusiastic catalyst for prov.en.der, left the group shortly after its formation to care for family.

A collective is a co-operative enterprise.  A collective noun names a number of people or things. prov.en.der is both. Members cherish Mason’s Great Recognition and defining the “things supplied” together, continually inviting others to join the conversation.  A pro.ven.der of teachers? -- an outcropping could occur anywhere!  It is a work that is never done and always revealing itself but they believe we are all better for being on this road together:  The six share nearly a century and a half of Mason experience and have all made Mason's quiet method both their life's work and their way of living.  They have brought up twenty-one of their own children, and nurtured thousands of others. They dust somewhere in the order of 1,500 linear feet of books, have published 15 of their own, and written and road-tested countless pages of k-12 curriculum. Hostesses of some of the original North American
CM study groups, all have logged years of group and leadership hours eventually founding and advising schools and other learning communities. They've lived in 7 countries (so far) welcomed 4 grand-babies  (so far) and, if it matters, have a combined 30 years of conventional post-secondary education.

prov.en.der takes seriously Charlotte Mason’s affirmation that people come to her work to “learn how to live.”  Her principles are not just a good way to educate children but an invitation to lean into essentially Christian postures which are life-changing not just for the child but for the parent or teacher.  prov.en.der offerings center on principle, returning always to the why of a classroom practice because when teachers understand and see the principles modeled they are able to act from the inside out in the moment of choice – know “how to fish,” to quote the old adage.

But the word provender suggests an even deeper satisfaction —  recognizing with Mason the mystery of all the ways that the Good Shepherd provides the feast, the hunger, and the fulfilling.  We enjoy the “fish” and that “taste and see” puts us all “at table” together over and over again as guests rather than experts dealing information or demonstrations.  So prov.en.der offerings are designed to allow an experience of this fullness—to actually live a CM day together.  There are no lectures or breakout sessions in a prov.en.der weekend or at L’ haRMas because that can generate a sense of "missing out" or "more is better."  prov.en.der works hard to be “unhurried” because a person’s internal life matters more than a book list or a schedule -- prov.en.der weekends are complete with 20 guests to preserve conversation and personal attention.

As Dr. Benjamin Bernier says eloquently in the introduction to Education for the Kingdom, "Charlotte Mason's principles…tie education, especially in its spiritual aspect, to the level of the personalized rather than institutionalized education."  At every juncture prov.en.der aims at the personal over the institutional, con amore, before proficiency.

Radical assent to personhood is counter-cultural.  So prov.en.der’s tendency to “tell it slant” may confuse those used to the ever explicating, expecting, and even excoriating church and classroom.  Someone seeking THE CM “how-to” may be disappointed in our offerings initially even though Mason’s practices are the bedrock.  It can be particularly hard for “do-ers” to trust the method and the pace. Our culture wants it ALL. NOW.  That’s why prov.en.der landed on the word, sojourn (or as one dear friend calls it, the prov.en.der “slow-journ”) after the old wisdom of all going on pilgrimage together -- prov.en.der offers to go with you, like a good midwife, as you labour over this profoundly incarnational approach. In the midst of the transition, they will wholeheartedly affirm Mason’s life giving way over the deadness of technique and hurry.


Grandmothering (it's a prov.en.der verb)

Author Fredrik Backman says, “having a Grandmother is like having an army.” Ultimately, what prov.en.der offers is not simply  women with decades of experience helping you connect the principles with Charlotte Mason's practice but an ever-growing troop of wise and weighty friends who can recognize the way when "crossing over.” Like experienced midwives they are prepared for the intermittent tears and cussing that sometimes come before the joy.  As seasoned Mason educators they know each traveler will have a unique timetable for trusting Mystery and will grow only as the heart follows desire and the mind puts a question to itself.  They want, like Jonas Salk, “to be the best ancestors they can be,” carrying this treasure into the next generation but
they'll go at a grandmotherly pace and with a good grandmother's assurance.  If they have to have a moniker they prefer,
​Person-driven, capital "P" since becoming all that they are and living profoundly means following “the altogether adorable Person” for whom and through whom Mason has done it all.  Please. Explore prov.en.der for ways to be “grand mothered in!”
Powered by